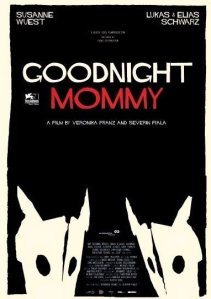 Two movies in one is the prize for watching Goodnight Mommy thanks to a mid-film shift that opens up its first half to further investigation. Austrian co-directors Severin Fiala and Veronika Franz delicately maneuver between the perspectives of a mother and her two shy boys to reveal the various pains and prejudices that are keeping them apart, all the while the boys’ growing distrust leads to them becoming increasingly unhinged in their treatment toward her.

Twin brothers Elias and Lukas (Elias and Lukas Schwarz) are first seen fooling around in the bucolic splendor of the Austrian countryside, playing tag in a cornfield, poking around in the woods, and floating on the pond beneath their boxy, postmodern home when suddenly a car door slams and their carefree summer comes to an end. Arriving home is there mother, all bandaged up from cosmetic surgery, with a strict new set of rules to be observed during her recovery. Already startled by their mother’s linen-wrapped, bruised-eyed countenance, the boys detect a deeper, darker transformation in their mother, whose cold dismissal of Lukas harks back to a mysterious accident of which he might be the cause, and is likely the reason for her surgery.

Playing on familial fears stemming from love, trust, intimacy, and identity, Fiala and Franz start by squatting down to the boys’ level and finding legitimacy in their suspicions. The boys spy on their mother and begin to believe she isn’t the real deal, an idea so abhorrent that they can only picture the cosmetically-enhanced impostor stuffed with cockroaches, a disgusting liar who has infested the pristine interior of their home. Susanne Wuest fuels the illusion by moving with a mechanical stiffness made all the more disconcerting for its subtlety, in contrast to, say, Vincent D’Onofrio’s wobbly Edgar from Men In Black, a fellow human-suited cockroach at heart.Regularly shot from waist height, she conveys an insidious unnaturalness through clipped speech and motions that contrasts the boys’ innocent wanderings.

Not until we’re firmly on the boys’ side – following a battery of nightmare scenarios and harsh treatment from their mother – are we given a glimpse of their mother’s truer self, manifested in sympathetic shots showing her exasperation with a pair of misbehaving sons. Lukas and Elias gain the upper hand, and Fiala and Franz do an about-face. The horror shifts perspectives, the antagonist is recast, and we’re presented with a second act that benefits from the disorienting inconclusiveness of the mother’s true nature, no matter how relatable she’s become. The mother is no longer the the frightful other, but the beleaguered final girl in a contest she’s unwittingly begun.

The mid-film shift isn’t the biggest twist Fiala and Franz have in store. Goodnight Mommy transforms at least once more before it comes to a close, and even if it’s through the use of a cliche so overdone it may as well be off-limits until the next generation comes of age, it still mutates impressively from one side of the story to another without sacrificing anything in between. Psychological dread permeates every scene in this patiently constructed domestic horror that cherry picks from sub-genres while carving out a place of its own. If it doesn’t go enough in any one direction for you, you can at least admire it for its surprising flexibility.

what could he possibly be writing about?

Honesty in the Terror

one filmmaker's musings on genre cinema and filmmaking in general

rockefeller films
We Minored in Film

Geeking Out Over Film & TV

Sundog Blog
Animal: A Beast of a Literary Magazine
thedroidyourelookingfor.wordpress.com/

Come for the stick figures. Stay for the Bergman.

Where All Things Film Converge

Science Fiction and Other Suspect Ruminations
Splatter: on FILM

My view on films as I see them. Take it, laugh, share it, leave it. Above all, enjoy!

Through it all, your spirit's alive

You Knew What I Meant

Just because you CAN read Moby Dick doesn't mean you should.

When you think 'horror' think HORROR MOVIES UNCUT. We are your go to site for Independent Horror. We have Horror News, Horror Trailers, Horror Interviews and Horror Reviews.

defining the words that define us