Under The Skin – Come for Scarlett Johansson, stay for the trippy sci-fi performance art fever dream concocted by Jonathan Glazer. Therein lies the hopes for Glazer’s artsy sci-fi horror about an alien preying on men in Scotland in the deliberately indiscreet disguise of Johansson’s curvaceous form. At times as detached as a trail camera strapped to a tree, Glazer observes Johansson with the same patronizing curiosity she lavishes on the men she hunts, provoking laughs and gasps in equal measure as she hits on every man she sees and ignores a shrieking infant to drag away a body. Cutting between improvised handheld scenes using local Scottish non-actors and polished sequences of nightmarish black box theater, Glazer delineates where Johansson’s alien asserts control and where her empathy unwillingly kicks in, sabotaging her mission and straining her working relationship with a nicely diverting mystery motorcycle man who crops up occasionally. An avant garde project that barefacedly craves influence over popularity, it teases the brain sufficiently, and touts ghoulish visuals and touching moments amidst Johansson’s clueless meanderings. Its inconsistent pace and Mica Levi’s at-first chilling, later just shrill, score are big turnoffs, however, and you may find yourself spending the time Glazer expects you to use to ponder the story to ponder his methods instead. 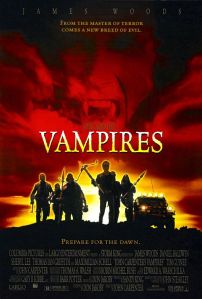 John Carpenter’s Vampires – You know you’ve lost sight of things when the scariest part of your vampire movie is the scene in which a woman wakes up naked and tied to a dingy hotel bed with a Baldwin brother in the room. The final piece to John Carpenter’s sub-par 1990s, Vampires does have its merits, due mostly to its Carpenter-esque familiarity, but it hits a tone that is far more jerkass than the badass Carpenter typically aims for. Sleazeballs James Woods and Daniel Baldwin run a Catholic Church-sanctioned vampire hunting outfit roaming the American southwest, where a powerful bloodsucker rears his head in search of a long lost relic. It has a pleasantly grotty, down home sort of feel, like a little brother to From Dusk Til Dawn, but with Carpenter’s motifs substituted in for Robert Rodriguez’s flare. In the right frame of mind it’s easy to enjoy for Woods’s and Baldwin’s banter, the scorching color palette, and James Woods’s occasional explosive, super un-PC ravings, but for the most part the main duo’s frequent obscenities, its treatment of ostensible female lead Sheryl Lee, and even the strange realization that most of the vampires they burn to bits are women leave it feeling awkwardly backwards. It’s crustily old-fashioned; not Carpenter’s best, but still one with his repertoire, a simple tale of pissed off working men battling a bunch of supernatural bullshit.

Stir of Echoes – Richard Matheson was never too concerned with explaining things in his books so it’s not such a bad thing that this 1999 adaptation of one of his novels is a fairly mindless, box-ticking affair. Writer-director David Koepp works in a similar vein, prioritizing effect over cause and delivering a tightly focused horror story-cum-90’s era whodunit. Essentially a middlebrow ripoff of The Shining, it stars Kevin Bacon as an electrician experiencing strange visions after being hypnotized by his New Agey sister-in-law at a party. It’s got ghostly apparitions, Bacon’s mental disintegration, an increasingly fearful wife, a psychic son, and even a psychic magical negro played by an underused Eddie Bo Smith Jr.. Koepp goes grocery shopping for cliches, chucking in freaky mirror scenes, misbehaving electronics, dream sequences, and basically whatever else makes sense at the time. Despite all this it’s watchable, mostly because Koepp hits the right notes and keeps things moving too fast to dwell on its similarities to other movies. The result of dependable talent tackling a less than visionary idea, it works in the end, and leaves you wanting more from the abandoned subplot hinting at an underground of tortured psychics. 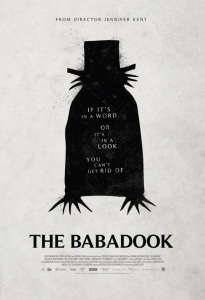 The Babadook – Talk about a movie that has everything going for it. An exciting new director, terrific acting, original concept, freaky new monster, and the best pre-release buzz anyone could hope for, the kind that makes its admirers bemoan the cold shoulder given to the horror genre by mainstream awards ceremonies. A feature-length version of Jennifer Kent’s 2005 short Monster, it sees embattled single mother Amelia (Essie Davis) fighting for her sanity when a popup book materializes on her front porch and invites in an entity that starts stalking her and her son, Samuel (Noah Wiseman). It’s certainly unique among its contemporaries, a stylistic throwback to German Expressionism and the pantomime era that Kent, cinematographer Radek Ladczuk, and the art department go for broke to achieve. Kent provides substance as well, Samuel serving as a constant reminder of Amelia’s grief, his birth date coinciding with the car accident that killed her husband. It’s a wedge that the metaphorical Babadook exploits when it attacks, trying to make Amelia spurn her offspring to feed her misery. Visually parched and filled with anxiety, it gets its frights from all angles, and between Davis’s frayed performance and Wiseman’s eccentricity, there’s no shortage of pitiful weirdness on display. The allegory is laid on a little too thick, and it might take a single mother to fully appreciate the depths to which Amelia sinks, but so much else has been done right that it’s a small complaint that its monster is thinly drawn after being brought to such phantasmagorical life.

One response to “Horror Movie Roundup Released: Under The Skin, John Carpenter’s Vampires, Stir of Echoes, and The Babadook”

what could he possibly be writing about?

Honesty in the Terror

one filmmaker's musings on genre cinema and filmmaking in general

rockefeller films
We Minored in Film

Geeking Out Over Film & TV

Sundog Blog
Animal: A Beast of a Literary Magazine
thedroidyourelookingfor.wordpress.com/

Come for the stick figures. Stay for the Bergman.

Where All Things Film Converge

Science Fiction and Other Suspect Ruminations
Splatter: on FILM

My view on films as I see them. Take it, laugh, share it, leave it. Above all, enjoy!

Through it all, your spirit's alive

You Knew What I Meant

Just because you CAN read Moby Dick doesn't mean you should.

When you think 'horror' think HORROR MOVIES UNCUT. We are your go to site for Independent Horror. We have Horror News, Horror Trailers, Horror Interviews and Horror Reviews.

defining the words that define us